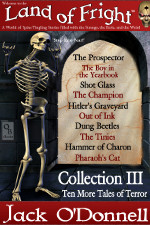 Buy on Amazon for only $2.99 (or read free with Kindle Unlimited)

#21 – The Prospector: In the 1800’s, a lonely prospector finds the body parts of a woman as he pans for gold in the wilds of California.

#22 – The Boy In The Yearbook: Two middle-aged women are tormented by a mysterious photograph in their high school yearbook.

#23 – Shot Glass: A man discovers the shot glasses in his great-grandfather’s collection can do much more than just hold a mouthful of liquor.

#24 – The Champion: An actor in a medieval renaissance re-enactment show becomes the unbeatable champion he has longed to be.

#25 – Hitler’s Graveyard: American soldiers in WWII uncover a nefarious Nazi plan to resurrect their dead heroes so they can rejoin the war.

#26 – Out of Ink: Colonists on a remote planet resort to desperate measures to ward off an attack from wild alien animals.

#27 – Dung Beetles: Mutant dung beetles attack a family on a remote Pennsylvania highway. Yes, it’s as disgusting as it sounds.

#28 – The Tinies: A beleaguered office worker encounters a strange alien armada in the sub-basement of his office building.

#29 – Hammer of Charon: In ancient Rome, it is the duty of a special man to make sure gravely wounded gladiators are given a quick death after a gladiator fight. He serves his position quietly with honor. Until they try to take his hammer away from him…

#30 – Pharaoh’s Cat: In ancient Egypt, the pharaoh is dying. His trusted advisors want his favorite cat to be buried with him. The cat has other plans…

Look for the other Land of Fright™ collections on Amazon!

This entry was posted in Land of Fright on Amazon and tagged horror short stories on Amazon, horror story collections, land of fright collections. Bookmark the permalink.

This site uses Akismet to reduce spam. Learn how your comment data is processed.