Welcome to the Land of Fright™!

I’m bringing you twisted tales of the macabre, the strange, the unearthly, and the weird. And I’ll top all these horror short stories off with my insightful words of wisdom. Or sometimes I’ll just say a bunch of stupid shit to make myself laugh.

If you want to read more about the Land of Fright™ you can go right here.

If you want to jump to the Land of Fright™ terrorstories you can go right here.

A team of exoplanet explorers encounter the wreckage of an ancient planet-seeding vessel that had disappeared centuries earlier. They soon discover the results of illegally modified seed pods being unleashed on an unsanctioned world…

The Black Coffin is now available on Amazon

A strange and ominous black coffin bewitches the residents of a small Kansas town in the 1880’s.

Land of Fright™ – Collection VII is available now on Amazon!

Land of Fright™ Collection VII is available now on Amazon!

#61 – Garage Sale Secrets: A man finds a mysterious item in a neighborhood garage sale that threatens to reveal the dark secrets of his past.

#62 – Thief’s Reward: A down-on-his-luck thief vows revenge on the wizard who has cursed his manhood.

#63 – Open Up a Can of Whoop Ass: A desperately thirsty homeless man opens up a mysterious beverage and is amazed to discover what comes out of the can. Those who have abused him had better beware…

#64 – Staring Contest: The proprietor of a wax museum warns his guests not to stare too long into the eyes of his wax beauties. Because they just might blink back.

#66 – The Candy Jar: The gift of a candy jar excites three siblings. Until they see what horrors come out of the jar…

#68 – Night Watchman: An elderly security guard listens to an old radio show, fantasizing about being a hero from his youth. When a surprising opportunity comes along that allows him to take on the role of his hero, he discovers there is much more to his childhood champion than meets the eye.

#69 – Me, Myself, and Me Again: A man meets other versions of himself from parallel dimensions and soon comes to realize the vital role he will need to play to save millions of universes from destruction.

More About the Land of Fright™ Series

The Land of Fright™ series encompasses the vast expanse of time and space. In the Land of Fright™ series you will visit the world of the Past in Ancient Rome, Medieval England, the old West, World War II, and other eras yet to be explored. You will find many tales that exist right here in the Present, tales filled with modern lives that have taken a turn down a darker path. You will travel into the Future to tour strange new worlds and interact with alien societies, or to just take a peek at what tomorrow may bring. And there are many, many new uncharted realms yet to be mapped, so keep checking back for new discoveries.

Land of Fright Collection VI is available now on Amazon

Land of Fright™ Collection VI is available now on Amazon!

#51 – Zombie Carnival: Two couples stumble upon a zombie-themed carnival and decide to join the fun.

#53 – Message In A Bottle: A bottle floats onto the beach of a private secluded island with an unnerving message trapped inside.

#54 – The Chase: In 18th century England, a desperate chase is on as a monstrous beast charges after a fleeing wagon, a wagon occupied by too many people…

#55 – Who’s Your Daddy?: A lonely schoolteacher is disturbed by how much all of the students in her class look alike. A visit by a mysterious man sheds some light on the curious situation.

#56 – Beheaded: In 14th century England, a daughter vows revenge upon those who beheaded her father. She partners with a lascivious young warlock to restore her family’s honor.

#57 – Hold Your Breath: A divorced mother of one confronts the horrible truth behind the myth of holding one’s breath when driving past a cemetery.

#58 – Viral: What makes a civilization fall? Volcanoes, earthquakes, or other forces of nature? Barbarous invasions or assaults from hostile forces? Decline from within due to decadence and moral decay? Or could it be something more insidious?

#59 – Top Secret: A special forces agent confronts the villainous characters from his past, but discovers something even more dangerous. Trust.

#60 – Immortals Must Die: There is no more life force left in the universe. The attainment of immortality has depleted the world of available souls. So what do you do if you are desperate to have a child?

More About the Land of Fright™ Series

The Land of Fright™ series encompasses the vast expanse of time and space. In the Land of Fright™ series you will visit the world of the Past in Ancient Rome, Medieval England, the old West, World War II, and other eras yet to be explored. You will find many tales that exist right here in the Present, tales filled with modern lives that have taken a turn down a darker path. You will travel into the Future to tour strange new worlds and interact with alien societies, or to just take a peek at what tomorrow may bring. And there are many, many new uncharted realms yet to be mapped, so keep checking back for new discoveries.

The Demon Who Ate Screams is FREE on Amazon, but just for a few days!

Posted in Land of Fright on Amazon | Leave a comment

Snowflakes is Free on Amazon for five days!

In the land of Frawst, special snowflakes are a gift from the gods, capable of transferring the knowledge of the Ancients. A young woman searches the skies with breathless anticipation for her snowflake, but finds something far more dark and dangerous instead.

Snowflakes is the third short horror story in the Land of Fright™ series of horror short stories.  It is free on Amazon from Oct 1, 2016 to Oct 5, 2016!

Land of Fright™ Mega Collection 2 is available on Amazon 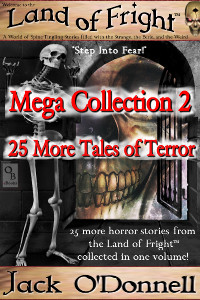 The Land of Fright™ stories contained in Mega Collection 2:

#26 – Out of Ink: Colonists on a remote planet resort to desperate measures to ward off an attack from alien animals.

#28 – The Tinies: A beleaguered office worker encounters a strange alien armada in the sub-basement of his office building.

#29 – Hammer of Charon: In ancient Rome, it is the duty of a special man to make sure gravely wounded gladiators are given a quick death. He serves with honor. Until they try to take his hammer away from him…

#30 – Pharaoh’s Cat: In ancient Egypt, the pharaoh is dying. His advisors want his favorite cat to be buried with him. The cat has other plans…

#31 – The Throw-Aways: A washed-up writer of action-adventure thrillers is menaced by the ghosts of the characters he has created.

#32 – Everlasting Death: The souls of the newly deceased take on solid form and the Earth quickly begins to fill with immovable statues of death…

#33 – Bite the Bullet: In the Wild West, a desperate outlaw clings to a bullet cursed by a Gypsy… because the bullet has his name on it.

#34 – Road Rage: A senseless accident on a rural highway sets off a frightening chain of events.

#35 – The Controller: A detective investigates a bank robbery that appears to have been carried out by a zombie.

#36 – The Notebook: An enchanted notebook helps a floundering author finish her story.

#37 – The Candy Striper and the Captain: American WWII soldiers in the Philippines scare superstitious enemy soldiers with corpses they dress up to look like vampire victims.

#38 – Clothes Make the Man: A down-on-his-luck young man steals a magical suit off of a corpse, desperately hoping some of its power will rub off on him.

#39 – Memory Market: The cryptic process of memory storage in the human brain has been decoded and now memories are bought and sold in the memory market.

#40 – The Demon Who Ate Screams: A martial artist battles a vicious demon who feeds on the tormented screams of his victims.

#41 – The Hatchlings: An afternoon barbecue turns into an afternoon of terror for a suburban man when the charcoal briquets he is using in his grill start to hatch!

#42 – Virgin Sacrifice: A professor of archaeology is determined to set the world right again using the ancient power of the Aztec sacrifice rituals.

#43 – Smog Monsters: The heavily contaminated air in Beijing turns even deadlier when unearthly creatures form within the dense poison of its thick pollution.

#44 – Benders of Space-Time: A young interstellar traveler discovers the uncomfortable truth about the Benders, the creatures who power starships with their ability to fold space-time.

#45 – The Picture: A soldier in WWII shows fellow soldiers a picture of his fiancé, but this seemingly harmless gesture is far from innocent…

#46 – Black Ice: A vicious dragon is offered a gift — a block of ice to soothe the fire that burns its throat. Too bad the dragon has never heard of a Trojan dwarf…

#47 – Artist Alley: A comic book publisher sees himself depicted in a series of drawings. He would normally find such homages flattering, except for what he notices happening in each subsequent drawing…

#48 – Dead Zone: A yacht gets caught adrift in the dead zone in the Gulf of Mexico. What comes aboard from the dead zone cannot really be considered alive…

#49 – Cemetery Dance: A man afraid to take his own life attempts to torment a devout man into killing him. But there are some things worse than death.

#50 – The King Who Owned The World – A bored barbarian king demands a new challenge.

Get Land of Fright Mega Collection 1 on Amazon as well!

The Hatchlings is now available on Amazon

That Was So Weird

The grill made a crackling noise and he looked back over to the coals. Even from this distance, he could see that one of the briquets had a very pronounced crack in it. Calum frowned. That was so weird. He moved back over to the grill.

When the tiny leg poked its way out of the charcoal, he dropped his beer bottle in startled amazement. The bottle shattered on the concrete floor of the garage, spraying his jeans with splashing liquid and spattering flecks of foam.

The Demon Who Ate Screams is now available on Amazon

You may have heard parts of this story before. It begins with a young martial artist forsaking violence for a peaceful way of life. He has a hot temper, and this always seems to get him into trouble, so the young man goes to the temple to study under the wise monks to learn their simple ways, and to learn how to keep his anger under control. The young man continues to train in the martial arts, of course, as that is part of his holy life. He uses kung fu to keep his body as fit as his mind. He struggles to remain chaste and pure, doing his best to ignore the sweet advances of a young woman he sees in the village on his rare visits into town (but fails — several times).

As you are probably aware of the tragic plights that befall most of these young men, then you know something always happens to rip the young martial artist out of his peaceful life. Always. Either his sister gets murdered, or a monster made of straw nearly decapitates him, or the village he grew up in gets destroyed, or a one-eyed dragon stalks him, or an ancient warrior made of stone attacks him, or a demon torments him, or his brother monks in the temple get slaughtered, or a skeleton army assaults him, or an entire school burns down with the children still inside. Something bad always happens to rip the young martial artist away from his idyllic life in the temple, forcing him to embrace the violent creature that exists deep inside himself.

Usually, though, not all of those horrific things happen to the same guy. Except this time they did.